This entry was posted on May 26, 2020 by Team Baader Planetarium 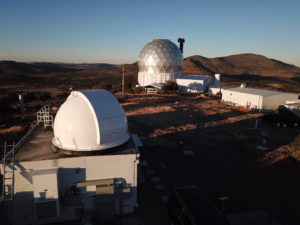 Please note: We wrote the following report of our dome assembly in January of this year months ago, but had to wait for picture release from NASA and the University of Texas, which was delayed for understandable reasons given the current situation.

Located in the Texas Davis Mountains on Mount Locke at 2,100m is the famous McDonald-Observatory.
The University of Texas owns and finances the site.

Due to the current construction of SLR stations at NASA for Space Geodesy Satellite Laser Ranging (SGSLR), a 4.2m high-speed dome from Baader Planetarium was installed here in January 2020. This is the second system of its type after the 4.2m Highspeed-Dome at the Goddard Space Flight Center, which was installed in April 2019.

For over 40 years, NASA's global network of satellite laser ranging (SLR) stations has provided a significant percentage of the global orbital data used to define the International Terrestrial Reference Frame (ITRF). The current NASA legacy network has reached its end and a new generation of systems must be ready to take its place (...) Read more about SGSLR at our 4.2m Highspeed-Dome at the Goddard Space Flight Center

Check out the dome also on our Observatories World Map and discover more information also on the official NASA-Blogpost: https://space-geodesy.nasa.gov/NSGN/sites/MGO/MGO.html

See below a video of the dome installation:

The 4.2m high speed dome, which is located near well-known observatories such as the 9.2m Hobby Eberly 91 Mirror segment telescope, is now ready for duty.

In this remote area near Fort Davis there is still an unbelievably transparent and even near horizon a sky full of stars that is not light polluted, which the Baader assembly team was able to experience impressively at a star party. The chosen time of year proved to be ideal; bearable, almost cool temperatures enabled an efficient workflow. In comparison, August would be unpleasantly hot there.

Fortunately, the approval of drone photographs was successful, thus allowing the special ambience of this historic observatory facility to be documented in the best possible way. It is also noticeable that Mount Locke is not the highest peak of the Davis Mountains, but it partly fulfils the role of a front mountain. This often means better seeing - but also increased wind loads, which requires stable dome construction.

Interesting was also the experience that there are very strict light protection regulations, night work with lights or even just flashlights is strictly forbidden. We are already looking forward to the installation of the next high-speed dome for NASA in Svalbard.

Please find below some more images of the dome installation