Can the Steeldrive II be mounted to a 2 inch monorail focuser as fitted to a TS Optics Ritchey-Chretien.

9
Unfortunately this will not work, you would have to replace the TS focuser with a Diamond Steeltrack Focusser

9
Thank you! Unfortunately you cannot connect the motor directly to a PC program, you always need to go through the SteelDrive controller

You must be logged in to answer questions.
How can I make sure that always the same COM-Port is used?

8
The COM-port is managed by Windows; the SteelDrive can't change it. Usually, the device should always use the same COM-port on the same computer, as long as it is always connected to the same USB-port. We recommend that you set up a SteelGo II profile on every computer on which you use it.

The programme "ComPortMan" by Uwe Sieber should make it possible to set the COM-port numbers permanently. You may want to try it out: www.uwe-sieber.de/ComPortMan.html Please note that this software does not originate from us and we therefore cannot assume any guarantee for it.

You must be logged in to answer questions.
I installed the Steeldrive II and the controller on one of my scopes. Works perfectly, thanks! You mention that he focusing motor will be sold separately. Is that already possible? I want to install the second motor on another telescope.

5
Glad to hear you are satisfied with the motor focuser!
Yes, separate motor units are available, we will contact you via email.

You must be logged in to answer questions.
Is the Steeldrive II ASCOM driver an AnyCPU driver? If not is it 32 bit or 64 bit?

1
The ASCOM driver is 32bit. Please use the ASCOM Hub to connect it with a 64bit application (APT, NINA etc.)

You must be logged in to answer questions.
After installing the motor, is it still possible to use the focus knobs manually, or will this cause damage to the motor?

-1
You can use the focus knob manually without a problem. Please hold in mind that you change the position that you have to do a new zeroing
afterwards.

You must be logged in to answer questions.
Does it exist a Linux / Indi driver for Steeldrive II ?

-6
Currently there is no linux/INDI driver.

If you need to control the SteelDrive II on a linux machine,
we can provide you with the serial command protocol for direct communication with the device.

You must be logged in to answer questions.
The aux output for a dew heater is stated at up to 10w. If I attached a slightly higher rated dew strip (for example 15w) to that output, would it be able to operate safely (albeit limited to a maximum of 10w of power) or would there be a risk of damaging the controller?

-6
The AUX power output is fused. The controller would not be damaged beyond repair, but the fuse would have to be replaced.
This would probably have to be done at our company as it is a small SMD part. 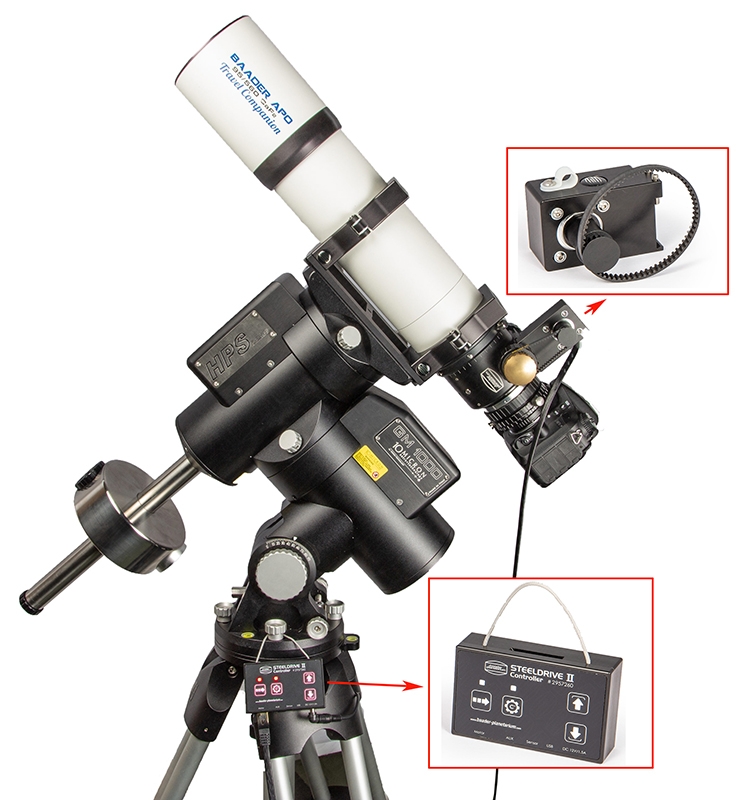 The aim of the development of the Baader Steeldrive II was not simply yet another motor focuser, but a complete platform which can adapt to the individual needs of amateur astronomers. That's why the "brain" of the Steeldrive II is not located in the tiny housing of the motor itself, but in a separate controller which also provides a keypad for manual control.

With a Steeldrive II motor focuser, you can automatically control your focuser with a computer as well as use the keys of the hand control for precise, vibration-free focusing.

The Steeldrive II consists of a motor unit, which is connected with a timing belt to the focuser's slow-motion-control to work without backlash, and of a control unit with the electronics, which also doubles as hand control. You can connect up to two temperature sensors at the same time, one on the motor unit and one on the control unit. One sensor is included with the Steeldrive II to compensate the drift automatically, if there are large temperature differences.

A control unit can control one motor unit at a time, but you can use a computer to control several controllers parallel.

The motor is designed to move to a saved position with highest precision if it is used together with the homing sensor – even if it has to move several kilograms over the complete travel of the focuser!

Rock solid, reliable and very precise
I am using 3 controller and motor units now for more than a year on three scopes: Meade LX 200 with a SteelTrack focuser, TEC 140 ED with Feathertouch and an TS 80/460.

Controller:
It is crafted from a solid aluminum block and is very stable. The keypad is easy to find in the dark thanks to the dimmable keypad, but also in a tactile way. You can feel the buttons with your fingertips. One big advantage is that the controller does not lose position when it gets unplugged (power or USB). In combination with the brackets the controller perfectly fits on the scope. Wiring can be made easily. The usage is intuitively and even visitors who have never operated such a device come to terms with it in seconds.
The power supply is standard 12V DC which makes it easy to integrate it into existing solutions. There are no special requirements.

Motor unit:
Also very solid and extremely precise. Only one minor potential improvement is the noise when moving, but this is complaining on highest level. Very positive is that you can use any CAT6 network patch cable to connect controller and motor unit. No special/unique cables are required and you can get the optimal length in any shop. The concept of belt drive is a big advantage over other geared solutions. The belt drive has no backlash. So you only have to handlethe potential backlash of the focuser.

Software:
The software is very stable now. Besides storing focuser’s positions it displays the temperatures and assists you very easily to set up temperature compensation. One big benefit: You can start multiple instances on the same computer to control more devices.

Firmware:
The Firmware can be updated with a few clicks via USB. So it is well prepared for future enhancements.

Conclusion:
Though it is definitely not a cheap solution, it is simply working and reliable. For my point of view worth every cent. The support is excellent. Its capability to be attached to almost all focusers, makes it versatile and an option not only for SteelTracks.

Reply
Show more comments (-5) Hide comments
Jerome 38/02/2019 08/02/201912:28
Great products and support service
Very good products!
Of course a lot of problems with such level of complexity when we try to connect all the devices on centralized software but the support service has very fast reactivity and all is fixed correctly and friendly.
Great, well done!
Reply
Show more comments (-5) Hide comments
Jennifer 64/03/2019 06/03/201905:02

SteelDrive II
The SteelDrive II is a solid piece of equipment. The design was very well thought out by the engineer. Installation to my NT Diamond SteelTrack focuser was a breeze. The hand controller is compact and is illuminated in red which will come in handy at night. Initially I was not able to get connected to the hand controller with my PC. My unit had a firmware issue that required a remote session with Baader and was fixed in less than 10 minutes. The SteelGo software has a nice user interface and is packed with many features that the user can customize. I am still getting familiar with it. I was able to get connected to APT and use the focuser with the ASCOM driver. The SteelDrive II was the last piece of the puzzle for me to implement fully automated imaging sessions. I look forward to imaging from the comfort of my climate controlled home during the winter and summer nights clear skies permitting.
Reply
Show more comments (-5) Hide comments
Paul BB 119/04/2019 30/04/201916:24
Excellent with a couple of small suggestions
Overall, I'm very pleased. I'm using this with a BDS-NT on a maksutov newtonian. The focuser itself is excellently constructed, and although it took a bit of care in fitting I'm very satisfied with it once it's on. I just received the motor and controller kit, which I intend to also use for the inbuilt dew controller.

With regards to the focusing motor functionality, it's fairly quiet, very fast, and seems accurate and fits very neatly and nicely. The main reason I bought this particular unit was because, unlike almost all the others, it permits manual use of the focuser without removing the motor - very nice for switching to visual use occasionally. The movement with the focus motor attached is not difficult - it's a little notchy, and not as smooth as without the motor, but I guess that's to be expected, and it is totally usable - it's a little hard to make large movements, I found you have to turn the fine focus knob first to get it moving then simultanously apply gentle torque on the coarse focus knob if you need to make a large manual movement, but again, it's usable without the hassle of removing the motor, and that's the main thing.

In terms of the dew control, I spoke to Baader about the 1 amp limit of the port. After a detailed discussion, it seems they may consider uprating that port to 2 amps in a future production run of the controller, as the circuitry could handle that. For me, 1 amp is just about sufficient for the main scope I'll be using it with, it's a shame mine didn't come with the 2 amp capacity, as I feel that would be better sized for larger scopes you might use this on, but like I said, the 1 amp capacity of the controller as it is at the time of writing this review should be sufficient for most smaller to medium sized scopes.

All in all, I'd recommend this especially if you're fitting it to the Baader steeltrack as it's a perfect easy fitment with good functionality. The price, well, it's certainly not cheap - nothing else with manual override is cheaper though so whatever - I think it would certainly be nice to see the price come down, but the market will decide that and although it was a big chunk of cash I considered it worth the expense.
Reply
Show more comments (-5) Hide comments
KRUST Philippe 246/09/2019 04/09/201916:18