Enough power for an observing session – with 12V/3A

Amateur astronomers know the problem: Dark skies can only be found far away from cities and power supplies. Usually, there is no other power supply than your car, and if its battery is dead, all you can do is call the roadside assistance. Typical lead-acid-batteries as they your used e.g. for car batteries are large, heavy, and will be destroyed if the are emptied completely – e.g. if you don't charge them for some months. Lithium-ion-batteries could be an alternative, if they weren't shock-sensitive or damageable by moisture – not to mention the tendency for self-ignition. They are also known for a low number of charge cycles and a memory effect, which harms there use after some time. Finally, modern technology has found a solution for all ambitious amateur astonomers and astro-photographers:

Also, the PowerTank Lithium it is evironmentally friendly, because it does not use toxic heavy metals. It is also more sturdy than lithium-ion cells, and with a capacity of 84,4W, it is not categorized as a dangerous good – you can take it on an airplane. The rubber-covered housing and the IP65-certification (dust tight and safe against water jets) make it the perfect outdoor power supply for all those nights when cheaper models will fail.

Power, when you need it!

The PowerTank LiFePO4 was designed to meet the demands of amateur astronomers: 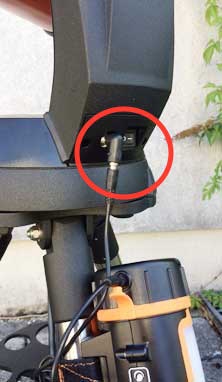 Exclusivle in Germany: Protective-Disconnect Power Plug for protecting your telescope

By mechanical stress – e.g. by someone tipping over the cable – a simple plug can apply strong forces onto the power socket of your mount. In the worst case, it can even be torn out of its anchoring and damage the mount's mainboard, which causes expensive repairs. The risk would even be increased by fixed screw connections.

Only those Celestron PowerTanks which are made for the German market come equipped with a Protective Disconnect Elbowed Plug, which decreases the risk of damages if someone tips over the cable.

Another specialty of the German version are warning stickers for the PowerTank's charger, so that you will not connect it accidentally directly to your mount, as this would damage the mount's electronics.