Upgrade of the Open University's COAST and PIRATE Telescopes on Tenerife 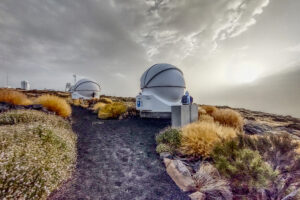 The United Kingdom's Open University (OU) operates two robotic telescopes, along with an associated weather station and all sky camera, 2390m (7840ft) above sea level (and the clouds!) at the Instituto de Astrofísica de Canarias (IAC) Teide observatory on the Spanish island of Tenerife. Until mid July 2021 these two telescopes, called COAST and PIRATE, had the following telescope equipment setups:

You can read more about their astronomy-related offerings here.

In July 2021 a small Baader Planetarium team went to Tenerife to upgrade and service these astronomical facilities. Here is an overview of what our team undertook. 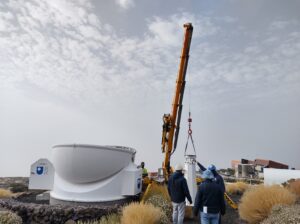 Hoisting the Baader pier from the COAST dome

Our first job was to decommision the existing C14-based COAST facility in readiness for its upgrade. The telescope and computer system power were first shut down and the Celestron C14 was removed from the mount and its camera and filterwheel safely stored for cleaning as it was to be reused with its new telescope. By the time this first step had just started, a knock at the observatory door hearalded the arrival of the very helpful Spanish crane crew. Although much earlier than expected, this was welcomed as it helped bring forward the whole schedule for that day. With the telescope and accessories removed from the mount our All-Sky dome was opened exposing the mount to the lovely sunny Canarian sky. With help from the crane crew, COAST's 10Micron GM4000 equatorial head was lifted from the pier and safely put aside in the dome. The Baader pier was then unbolted from the concrete floor, hoisted out of the dome and then transported up to the PIRATE dome ready for its installation. 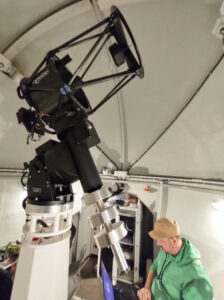 Next, our attention next turned to PIRATE. In a similar operation to COAST, the CDK17 OTA and its accessories were unmounted from the GM4000 mount and safely stored and its pier was then lifted from the dome. The pier that belonged to COAST, which was waiting paitently outside, was then lifted and installed. With the crane still in position, PIRATE's mount was then attached to the pier ready to accept its new telescope the following day.

Our next job was to bring up the new Baader pier for COAST from storage using the small lifting truck. Once outside the dome, the crane was again used to hoist it in its dome. The pier was filled with dry sand (for vibration reduction) and then the mount was attached. With all the heavy lifting complete for the day, the crane crew left but returning again the following day.

Cleaning was next on the list of tasks to be done starting with the dome interior, the mounts and then telescopes. One half of the team worked on the Celestron C14 and its corrector plate while the others gave the CDK17's optics a gentle but thorough clean (all done with our Optical Wonder cleaning fluid).  The C14 was boxed (and later taken to be stored at the IAC) and the CDK17 was covered and then relocated to the COAST dome for mounting - this would be the new COAST telescope. The imaging equipment from both telescopes were next. These delicate items were taken down to the IAC building for a cleaner environment where the cameras and filterwheels were disassembled, inspected and given a careful cleaning before being reassembled and later taken back up to their respective telescopes for installation.

The "new" upgraded CDK17/GM4000 COAST facility was finally put back together with all accessories attached and re-cabling completed and a quick test powering up the mount and telescope showed that all items were working. After a well-deserved dinner, we all went back to COAST but sadly due to high winds that evening after sunset we weren't able to do the final set up, calibration and testing "under the stars". 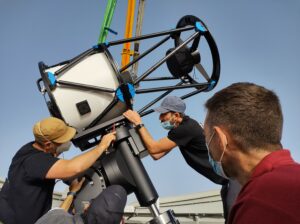 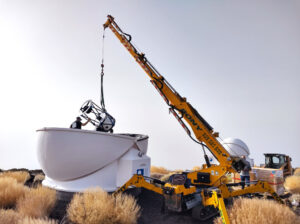 Installing the PlaneWave CDK24 into the PIRATE observatory

The first job was to transport the crated telescope from storage at the IAC astronomers residence up to the PIRATE dome. With the dome open ready to accept its new astronomical "resident", the crane carefully hoisted the telescope out of its crate into the dome where it was mounted on the GM4000 - an operation that went quickly and smoothly. With all the heavy mechanical lifting side of the installation complete we thanked the crane crew for their help and they left. We then attached all the CDK24's accessories, routed the necessary cables and powered up the telescope checking its systems so that is was ready for real-world use.

Weather conditions that evening, and for the next few nights, meant we were able to configure the telescopes, including optical collimation, and perform the necessary calibrations which included polar aligmment and advanced multi-star mount modelling.  We often stayed into the early hours making sure all was working as it should and taking the opportunity to image various celestial objects where were able to get 20 minute unguided exposures even at such long focal lengths! 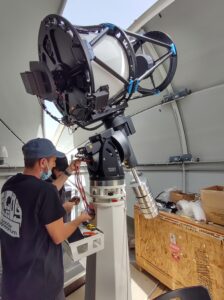 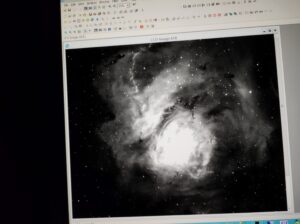 On the final full day of our visit, and before "handing the keys back to the OU", we spent time doing a number of small but important jobs which included updating the software for the weather station, cleaning the all-sky camera dome and giving our domes a final check over and a final clean.

With all the jobs that were required to be done completed, and after a group photo, we all left the beautiful island of Tenerife....and we can't wait to go back! 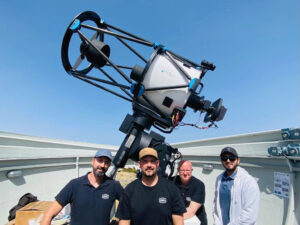 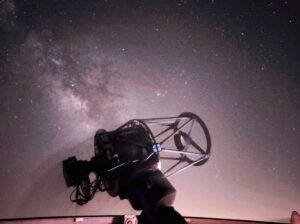 COAST's new CDK17 with the Milky Way in the background 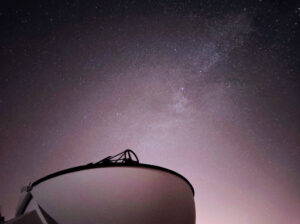 Telescope and observatory under a sky full of stars

Thinking back to this "upgrade-and-servicing mission" all those months ago, it was so nice to be able to take the opportunity (while the cameras were busy taking their long exposures) to be able to stand and look up through the openness of our All-Sky domes at the night sky and our Milky Way under the dark skies of Teide and ponder our place in the universe.

In addition to supplying domes, telescopes and mounts, we also offer a full installation service on these products. To find out more about these products and services please contact us here.